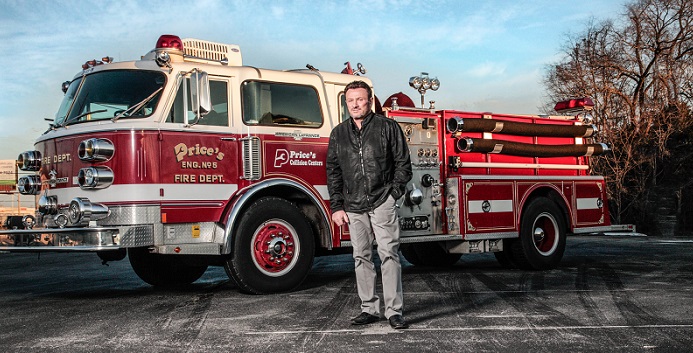 ZRYLW: We appreciate you being here today.

Bobby Price: I’m happy to share with your readers.

ZRYLW: We understand that you own an old New York firetruck. How did that come in your possession?

Bobby Price: Back in 2006, I attended an auction at the Cars of Dreams Museum. The fire pumper – an American LaFrance Triple Combination – had just been delivered. Notably, the truck was driven the entire way.

ZRYLW: Why was it decommissioned?

Bobby Price: The truck was over 20 years old at the time. And, despite having served faithfully, Engine Company 2 of the Commack Fire Department made the decision that it was time for an upgrade.

ZRYLW: Can you tell us about American LaFrance?

Bobby Price: American LaFrance was an American fire apparatus manufacturer from 1873 until 2014.

ZRYLW: What other kinds of vehicles did the company manufacture?

ZRYLW: Why did the company go under?
Bobby Price: The company filed for bankruptcy in 2008 citing implementation problems with its new enterprise resource planning software.ZRYLW: But they continued through 2014?

Bobby Price: After six months, the company emerged from bankruptcy and continued successfully until ceasing operations in 2014.

ZRYLW: What drove your decision to buy the fire engine?

Bobby Price: I’m something of an automotive history enthusiast and really felt like this truck symbolized the greatest manufacturing accomplishments in America.

Bobby Price: Many collector vehicles simply earn recognition for their ability to go fast. This truck is different in that it was directly responsible for saving countless lives in its two decades in service.

ZRYLW: When you put it that way, it’s pretty remarkable.

Bobby Price: I think so. I know the firemen were sad to see it go.

ZRYLW: You mentioned that you purchased this from the Cars of Dreams Museum. Tell us about that…?

Bobby Price: The Cars of Dreams Museum is a showcase of classic vehicles located in Palm Beach County, Florida.

ZRYLW: And it holds auctions?

Bobby Price: Usually when it has an auction, it’s to raise funds for an important cause.

ZRYLW: Can you give us an example?

Bobby Price: The Cars of Dreams Museum holds classic car shows and auctions that benefit everything from the Hospice of Palm Beach County Foundation to the Palm Beach County Sheriff’s office Shop with a Cop program.

ZRYLW: Sounds like a great place to stop on a vacation!

Bobby Price: It definitely is…

Bobby Price is the owner of Nashville’s premier collision repair provider Price’s Collision Centers. He is an avid automobile collector who says cars have played a major role in his life since childhood.